mk North America, an industry leader in the design and manufacture of industrial conveyor solutions, is announcing the launch of two new modular plastic belt conveyor systems, the KMF-P 2040 and KFM-P 2040.

Designed to complement a variety of industrial applications with the utmost flexibility and functionality, these systems are made with mk’s patented aluminum extrusion framing. The belts for these systems are made with interlocking plastic segments, as opposed to traditional fabric belting, for increased wear-resistance and load capacities. Modular plastic belts are also positively driven, which makes them easier to track than traditional synthetic belts. 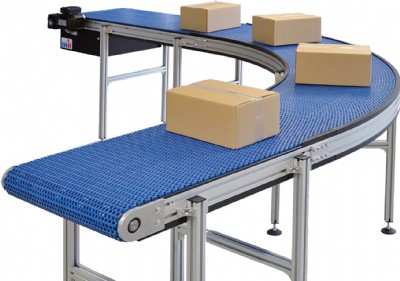 For applications where a curved conveyor is required, to save space or carry product around corners, the new KMF-P 2040 modular plastic belt conveyor offers 90° and 45° curved configurations (with 180° possible). The KMF-P 2040 boasts a usable width of just 30 millimeters less the outside frame width, making it among the most streamlined conveyors of its class in the marketplace. Additionally, curved sections for the KMF-P 2040 are made with solid pieces of bent aluminum extrusion, a feature not offered by mk’s competitors. 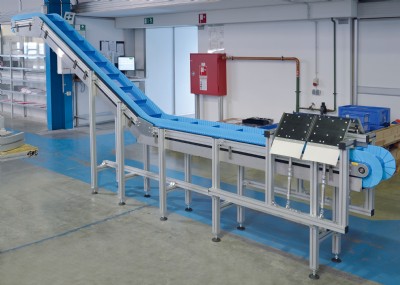 Where inclines or declines are needed, to match a production line or provide ergonomic support to employees for example, the new KFM-P 2040 inclined modular plastic belt conveyor offers belt bends of 30°, 45°, and 60° off a horizontal system. Guided in PE-1000 wear strips, the KFM-P 2040’s modular belt is particularly useful in applications such as transporting slugs or molded plastic parts, light punched parts, or pre-packaged food products.

“At mk North America, we are very excited about the addition of these two new conveyor platforms,” says mk’s Marketing Manager, Kate Nadeau. “For years we have been building these units as custom designs. With the introduction of these standard platforms we are able to continue offering a great solution to our customers, but now at a reduced cost and lead-time, due to the standardization of parts, materials and design features.”

One of mk’s flagship modular plastic belt conveyors, the MBF-P 2040, is also being relaunched by mk North America with an improved design that increases versatility and functionality. The new MBF-P 2040.02 boasts an improved load capacity of up to 1,000 lb, speed of up to 200 ft/min, and a potential conveyor width of between 80 and 3,000 mm. The modular plastic belt is positively driven, which reduces tracking difficulties in particular situations. These improvements represent the most significant redesign of the MBF-P 2040 after 15 years among mk North America’s offerings.

With the introduction of these new systems, mk North America’s aluminum conveyor offerings are now capable of providing solutions for a wider range of applications than any time in the company’s history. Potential applications include food processing and handling, packaging, manufacturing, machine building, general industry, and many others.