Coordinate systems provide a way to define a point in space in either one, two, or three dimensions. The Cartesian coordinate system is often used for straight-line movements, where specifying the motion of an axis is simple — input the location to which the axis should travel (or the amount of distance it should travel from the starting point), and it will take a linear path to the specified location. Similarly, if the application involves multiple axes, the end point is specified (x, y) or (x, y, z), and the axes can travel independently, one-by-one to the specified location, or they can travel simultaneously in a coordinated fashion using a method referred to as “linear interpolation.”

Recall from above that with Cartesian coordinates, any point in space can be defined by only one set of coordinates. A key difference when using polar coordinates is that the polar system allows a theoretically infinite number of coordinate sets to describe any point. Two conditions contribute to this. First, the angular coordinate, θ can be any multiple of a full revolution (one revolution is 2π). For example, the angular locations of (5, 0), (5, 2π), and (5, 4π) are the same, as are (5, π/2) (5, 3π/2), and (5, 5π/2). And basic trigonometry makes it easy to determine polar coordinates from a given pair of Cartesian coordinates. 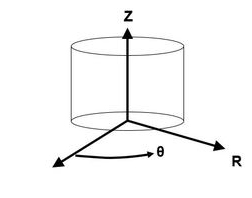 If a third axis, z (height), is added to polar coordinates, the coordinate system is referred to as cylindrical coordinates (r, θ, z).